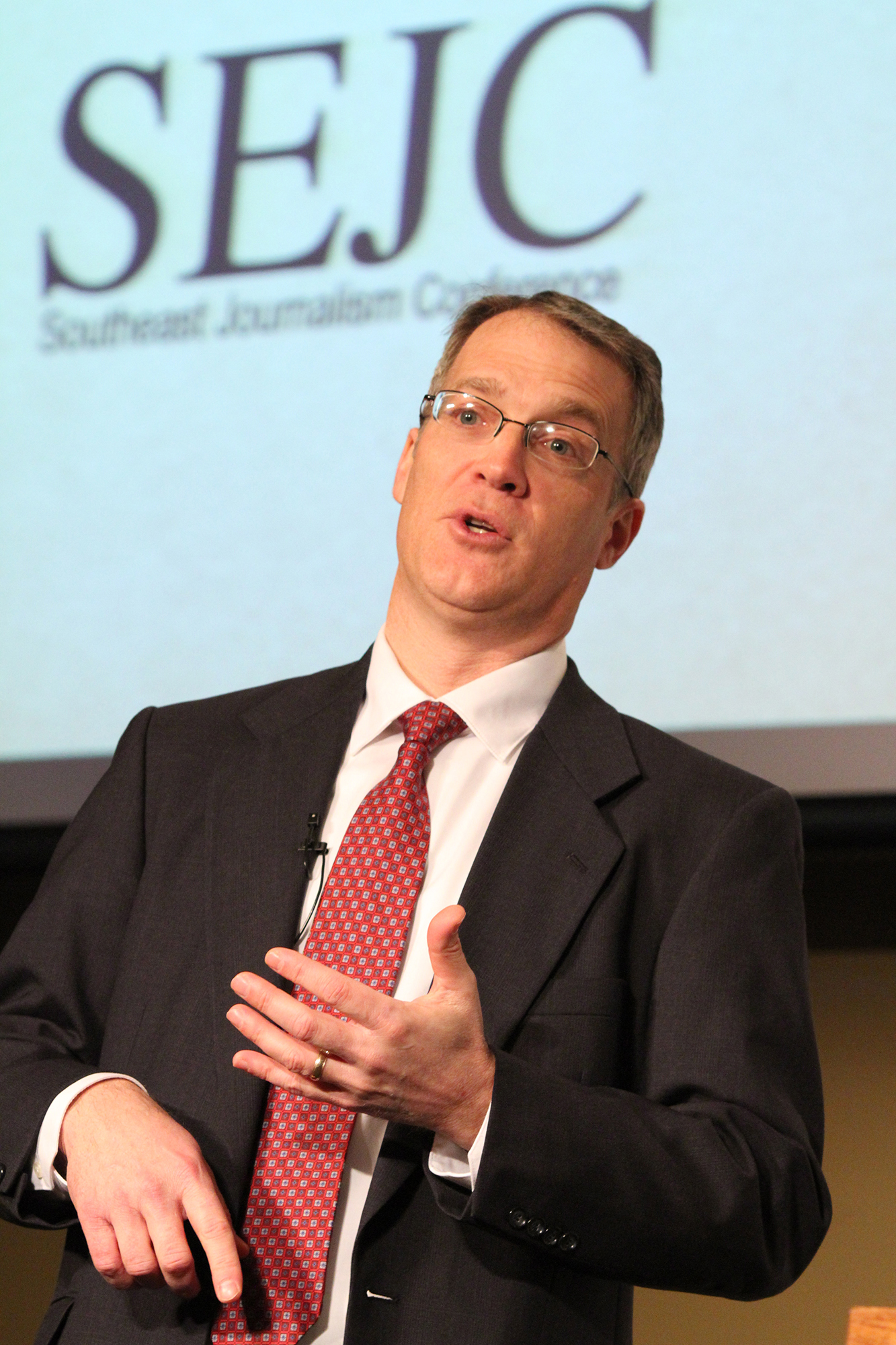 The outlook seems bleak: Print subscriptions are down, and papers are waning in size. However, the shift doesn’t signify a decline in readership, but rather a shift in how news is delivered, said executive editor Steve Coffman of The Jackson Sun in Tennessee.

“So often you’re going to hear, ‘These papers are dead. They’re dying. They’re losing subscribers. There’s no future in it,’” he said before students from seven states at last month’s Southeast Journalism Conference at Union University. “But I don’t think so. We have a good case to make.”

The award-winning, 26-year news veteran also serves as the paper’s director of content and audience development, and as technology progresses, Coffman said, so does journalism’s reach.

“We have lost subscribers to our print product,” he admitted. But at the same time, he continued, the loss has created instead a “vivid, visual audience going up, up, up, up in some pretty significant ways.”

This adapted audience has become privy to technology. Smart phones and tablets provide readers with news coverage at any time and in any situation, so news companies—like Gannett Co., Inc., the country’s largest media corporation that owns The Jackson Sun—are forced to adapt or sink. But these advances are inevitably expanding beyond websites.

And it does. The “Full Access Plan” to any Gannett-owned paper provides that access to articles on the paper’s website and an application providing the day’s news stories. Readers can also choose to use the e-edition app, which, instead of listing articles, shows a digital form of the paper in its printed layout.

The shift in news delivery also prompted a shift in Gannett’s pay model. Those who visit Gannett websites but do not subscribe are allowed a certain number of free articles, the sum of which is based on readership characteristics about the surrounding market. Jacksonsun.com, for example, allows for 20 free articles per month before requiring a subscription, which costs $12 for digital-only, and $10 for both digital and print. Theadvertiser.com in Lafayette, La., however, only allows for 10: But its subscriptions cost $9 whether purchasing digital-only or both digital and print subscriptions.

As fast-paced, often citizen-based news coverage is on the rise, though, Coffman said news organizations must continue going above and beyond to answer the questions no one is asking. He cited a story uncovered by The Jackson Sun that questioned the suicide of an inmate while he was on suicide watch. The Sun’s coverage, Coffman said, pushed the jail to enact policy changes that may save lives in the future.

“If we, as a newspaper, aren’t asking those questions, aren’t doing that digging, who’s going to?” he said. “I don’t think anybody’s going to.”

“We make sure that our reportage and our structure is aligned to be covering those topics better than anybody else, and I think that we are doing that,” he said.

According to web information company Alexa, Coffman said, Jacksonsun.com ranked last month as 112,000th in the world. (To put it in perspective, a March 2012 survey reported by the San Francisco Chronicle totaled the world’s active websites at around 644 million.)

In January, the site had 3 million page views. It peaked in 2008, when 268,500 individual computers visited it after tornadoes blasted through Union University and garnered national attention.

“That’s a better audience than we’ve ever had as a print product,” Coffman said.

Jackson’s local television station, he said, is about 300,000 places behind The Jackson Sun in Alexa’s ranking, while the local talk radio show goes back about 3.3 million.

“I think there’s a good argument to be made there,” Coffman said, “that we have a lot more room to grow, even as all of these ways of reaching people continue to change and evolve.”

But as the technological tides change exponentially year after year, will the presses continue rolling?

“I don’t want to let anybody think we’re going to forget (print),” Coffman said, “but obviously, a lot of people want to get their news in different ways, and we’re adapting to that, and changing that. It’s not just about newspapers anymore.”