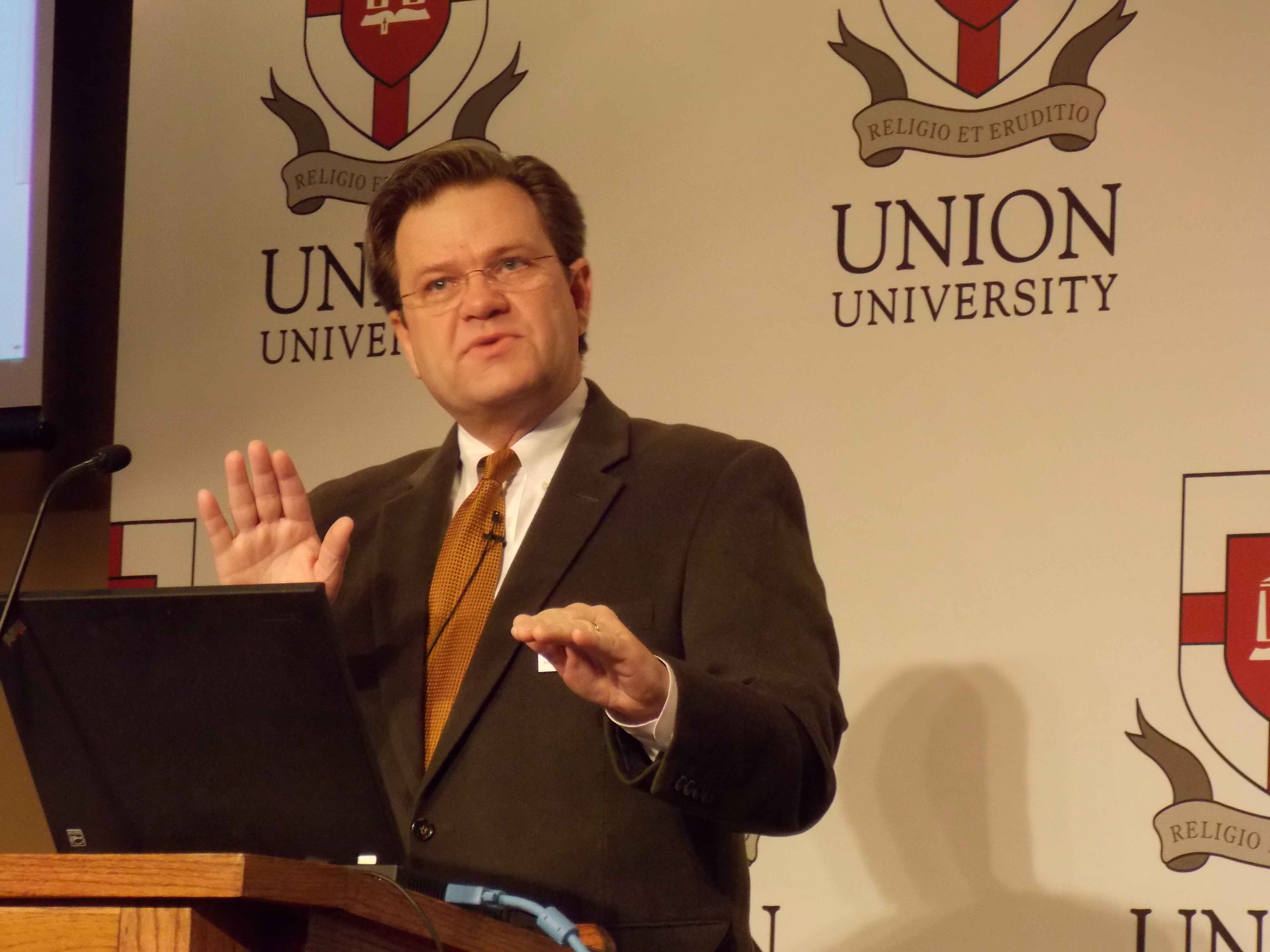 Gene C. Fant Jr., Ph.D., gave the opening address of the 27th annual SEJC convention at Union University in Jackson, Tenn., encouraging his audience to “be committed to truth no matter where it may lead you.”

“The ultimate power of narrative is that it has truth,” Fant admonished his listeners. “Truth is among the most powerful elements in the universe. So when journalism, when narrative, when storytelling embraces the truth, it suddenly begins to be filled with power. We cannot allow ideology to trump our commitment to truth, no matter what our ideology might be. And so this is the ultimate power of narrative that I encourage you all to embrace.”

As an English professor at Union, Fant related the importance of journalists’ accuracy and truthfulness to a piece of literature he assigns as part of his English classes: George Orwell’s classic “1984.” In this work of speculative fiction, Fant explained, the main character’s job is to redact offensive material and facts that have changed from old newspaper articles.

Although he writes mostly editorial content for nationally syndicated publications like The Chronicle of Higher Education and First Things, Fant admitted he does “dabble” in journalism, but as more of a raconteur. True to this self-proclaimed identity, Fant began his speech to the SEJC members and advisers by using anecdotes to illustrate how journalists affect public perceptions of events. Through word usage, Fant said, journalists can make any event anything from unforgettable to totally negligible.

The news coverage of the aftermath of a tornado that wracked Union University in February of 2008, Fant said, was “one of the most transforming events” of his life. However, the coverage of a crisis at his high school when someone set fire to the school after setting off a military-grade tear gas canister in 1979 became forgettable to many who had lived through it.

Fant also warned against reporting information hastily, a problem that has compounded as information becomes easily available through the Internet. Specifically, he referred to some faulty journalism that occurred after the shooting in Newtown, Conn., in December.

“There was just misinformation all over the place,” Fant said, “and what struck me was that our national memory of the event was also being influenced by false data. It was journalists, who were there on the scene trying to do their best with the information they were given but who were also being conflated with nonprofessional media, (who were) shaping our eventual memory of how the event took place.”

One of the key contributors to this problem of faulty facts and egregious errors lies in the surge of “news” that spreads unprofessionally through “citizen journalism” on social media sites like Facebook, Fant said. He warned the audience that this citizen journalism has a distinct “dark side.”

“These are not people who have journalistic standards,” Fant continued. “They aren’t looking for any of the classic things we teach in our programs. Instead, what we have are live eyewitnesses with opinions.”

To combat this, Fant stressed the importance of professionalism in journalism, because the surge of citizen journalism can adversely affect not only the memory of incidents in the annals of history but also the perceptions of the profession.

To correct what Fant described as a weakening in the profession, he encouraged those future journalists listening to fight to uphold the principles of truth and honor in reporting. Only by adhering to this code, he said, would journalism become revitalized and the power of narrative restored.

“How do we carve out a future for journalism in the era of citizen journalism and digital democracy if we do not dedicate ourselves to utter truthfulness?” Fant asked the crowd. “How do we maintain our reputations as shapers of the democratic impulse? If everyone else is being unreliable, we must be reliable, and we do this through our truthfulness.”