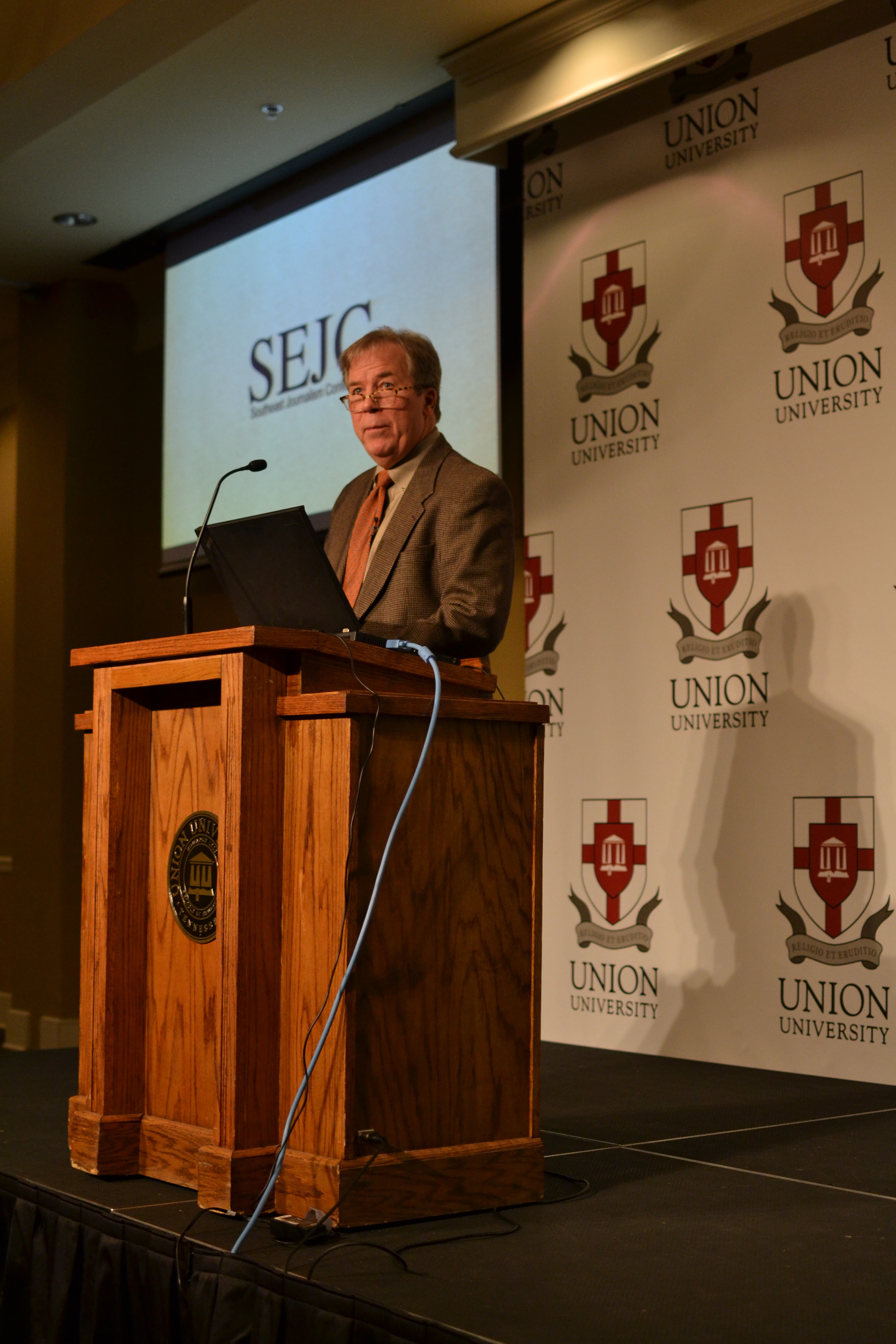 Steve Duin, The Oregonian’s metro columnist for 18 years, encouraged attendees at the SEJC convention to find the place where “your deep gladness and the world’s deep hunger meet,” a concept he said is at the heart of journalism’s future.

The centerpiece of Duin’s speech was the story of Portland’s Roosevelt High School, a subject he said he discovered after perusing the sports section in January 2009. The box score recounted Roosevelt’s girls’ basketball team’s 88-10 loss in front of a crowd of 10. One player, Togo native Ahoefa Ananouko, scored eight of Roosevelt’s 10 points.

When Duin arrived to write about the team a month later, he said he realized Ananouko’s amazing story, which included living in a refugee camp in Benin for seven years after her father spoke out against Togo’s dictatorship, wasn’t the story he was there to tell. He was there to tell his readers why there were only three parents at the game for the 10 “stubborn survivors” on the basketball team.

“The missing parents had decent excuses — they were working two minimum wage jobs, they couldn’t afford the bus pass or the $6 ticket,” the basketball coach told Duin.

Then, the kicker: there were five seniors on the team the year before, and on the last home game, “not a single parent was there to walk their daughters to center court,” the coach told Duin. “The kids were asking me, ‘Who’s going to walk me down?’ It hurt to look in their faces.”

When he wrote his column about Roosevelt’s basketball team, he ended it with, “The girls’ final home game of the season is next Tuesday against Madison. I promise you, one parent will be there. Anyone care to join me?”

One thousand six hundred people showed up to that final basketball game, where Roosevelt lost by two points.

“What I discovered there convinced me I was at the place where my deep gladness and the world’s deep hunger met,” said Duin, who is the brother of Union journalism professor Julia Duin (see related story on snake handlers). “I went back to Roosevelt because my newspaper still allows me to share the great stories wherever I find them.”

His columns on Roosevelt, which revolved around a 16-year-old cornerback with a 2-year-old daughter, the struggles of 110 of the 700 kids at Roosevelt who were homeless, and the return of a pro football player who volunteered to help coach the team, created a domino effect.

One reader, Kirsty Dickinson, called the football coach and asked if they ever had team dinners after reading about a player who told the coach he hadn’t eaten in a couple of days because of money issues at home. The coach told her they didn’t have the funds to do it, and she showed up that week with enough pasta and cookies to feed 45, and continued to feed the team every Wednesday, even as other athletes and school employees made the number swell to 85 — a realization of the story of five loaves and two fish.

“’We believe we are called to love the world,’” a volunteer told Duin, a quote he called his favorite line of the year, “’and the older I get, the more love looks like work.’”

Duin’s work, he said, is to write for a daily paper, despite the industry’s outlook.

“It is a daunting time to subscribe to that delusion,” said Duin. “In my lifetime, I have seen the morning paper evolve from the final authoritative word on the matter to a largely irrelevant afterthought. Those of us who remain are left with few illusions about where this is going. We’re playing the dinner music on the sloping deck of the Titanic.”

When the Portland school district was working to redesign the district, the football coach told him Duin saved his job, because after the attention Roosevelt garnered from Duin’s columns, there would be public outrage. That evening, Duin said he realized Roosevelt had saved his job, too.

“Just about the time giving up was becoming fashionable in the newspaper business, you and Roosevelt came along with your deep hunger and somehow found your way to my deep gladness,” he said. “Maybe when we finally find the place of hunger and gladness that was designed especially for us, we can finally relax and devote ourselves to helping others find the place that was designed especially for them.”

Duin said he is able to share his stories because he has “total carte blanche” at The Oregonian, and gleans his topics from friends and reader suggestions. At times, however, he said he does have a shortage, which is when he takes a walk and talks to strangers, “because pretty much everybody has a doggone good story hidden somewhere inside of them.”