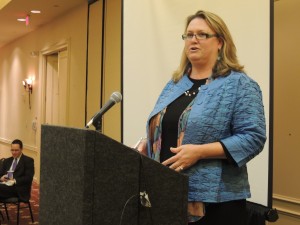 NPR reporter Debbie Elliott detailed the success the public radio network has seen in recent years, saying it provides “perspective about what’s been happening in journalism in the last decade.”

Addressing the Best of the South Awards Banquet during SEJC’s 28th annual convention in Lafayette on Friday, Feb. 21, 2014, Elliott, NPR’s Southern regional correspondent, said NPR has about 34 million listeners each week, 27 million of whom tune in exclusively to the station’s news programs. Even though journalism has declined nationally — with newspapers losing 22 percent of their readers and news networks losing 29 percent of their viewers over the last 10 years — she said NPR has seen a 19-percent hike in listeners.

“Why?” she inquired, holding a jar of tar balls and a tooth from a nutria rat. “These help us answer that question.”

The two props helped illustrate the significance of the kind of stories NPR produces, said the 51-year-old reporter based in Orange Beach, Ala. She called them “evidence I left my computer screen, hung up my telephone and I went somewhere,” telling the more than 290 college students and faculty in attendance that that is “90 percent of your success as a journalist.”

“Your very best work is going to happen when you’re out there on the ground and adapting to what you’re learning and seeing,” said Elliott, a former NPR Capitol Hill correspondent and weekend host of the popular program “All Things Considered.”

Elliott, an Atlanta native and University of Alabama alumna who has worked at NPR since 1995, has extensively covered the 2010 BP oil spill — from which she acquired her collection of tar balls. She said she has produced 136 stories on the subject, covering its lingering, widespread effects that include damage inflicted on economic, ecological and legal levels.

The experience gained through the coverage, she said, has made her a relative expert in oil spills. Because of that, Elliott said, NPR is sending her to Alaska to cover the 25th anniversary of the Exxon Valdez spill, which was considered to be the biggest in U.S. history until the Deepwater Horizon oil spill — as the BP spill is often called — dethroned it four years ago.

“I can tell you the difference between a tar ball and a tar patty,” Elliott said. “There’s a vocabulary to this, and I can tell it to you because I experienced the story.”

Elliott laughed when she said she did not kill the nutria from which the tooth came, but she said she “covered the man who did because they were eating up the marsh in Louisiana.”

With animated imagery, Elliott recalled reporting on nutria “chompin’ up all the marshes,” partly causing Louisiana to lose its wetlands at an alarming rate.

“I actually took my microphone into the swamp to see what they do, and I was able to explain to our listeners in a very vivid way what this issue was,” Elliott said. “That’s something I think NPR does better than just about anybody.”

The Atlanta native explained NPR has 15 U.S. bureaus and 17 foreign ones. Saying that NPR listeners “actually get to experience” what they hear, Elliott described the network’s stories as ones “you can actually touch, feel and smell.”

Elliot — who has reported only for radio since her first job as a sophomore at the University of Alabama’s public radio station —used these examples to “instill the value of original reporting” in her audience.

“You’ll find there’s not just this side and that side to a story,” she said. “There’s history, there’s context, there’s nuance to a story. See for yourself, look for yourself what the real story is.

“There’s always more to a story,” Elliott continued, “and that’s your job as a journalist to get at that.”